I’ve lived abroad for about a year and a half now, and I can honestly say I have never felt more American than when I left America. I probably wouldn’t have considered myself a patriotic person prior to taking that leap across the Atlantic, but when my introductory speech upon meeting a new person started to include my nationality, it was sort of hard to ignore my distinctly American identity. (First line of my About Me page = “Hello friends! My name is Lucie and I’m an American college student”).

With this title of “American girl” comes a number of assumptions and repeated conversations. For example, as I go to a highly politicized school (think future French presidential candidates), the many news-worthy actions of the current American president are an unavoidable topic of discussion. But aside from politics, there are a number of assumed cultural values, style choices, and even personalities that  I have found people to commonly attribute to Americans. Some of the more negative stereotypes include that we all subsist on reality television and fast food, have a display cabinet of guns in our living room, and mentally position ourselves at the center of the world (culturally, economically, etc.). Perhaps I’m exaggerating a bit, but there have been times when I’ve felt an immediate negative reaction from someone after I told them my nationality. I sort of feel like it’s the responsibility of Americans who travel to combat these stereotypes and put a face to the diversity of our population.

On a lighter note, we also have the stereotype of the American tourist, some of the attributes of which I can (unfortunately) confirm after spending plenty of time around American tourists in Paris. This prototypical tourist may be found wearing a baggy Hawaiian shirt, khaki shorts, socks with sandals, a fanny pack, and taking selfies on an i-pad in front of the Eiffel Tower. They speak loudly enough to be heard from one end of the Champs-Élysées to the other and think any word in French is elegant, even if it’s “toilette.” 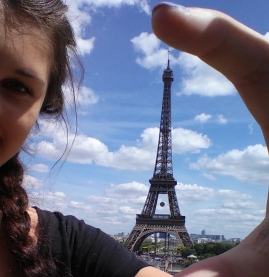 My own Eiffel Tower selfie on my first trip abroad, Paris 2014

For some reason, though, while I used to feel embarrassed upon encountering an American tourist with even one of these attributes, I now feel an instant burst of camaraderie. Hearing booming American voices from 100 yards away when I can’t hear the French couple who are seated one table over, listening to Americans complain about the lines at the airport, hearing Americans order “crapes” — all of these things used to annoy me to no end, even led me to introduce myself as a Canadian on several occasions (a practice I quickly stopped after meeting an actual Canadian). However, living among the French for so long has made even the practices I used to find annoying feel endearing. It’s the same way with my family. On my most homesick of days, I would happily listen to my step-dad yell at me for the 100th time for leaving my shoes under the kitchen table instead of in the garage. When surrounded by the foreign for so long, you tend to want for the familiar, in whatever shape that comes.

I’m not sure if this post applies to that many people who are not in my situation. Perhaps my sense of American-ness has multiplied even further, as I live in a country very much attached to their culture. It’s probably a result of all their revolutions, but one thing I can say about the French is they are very proud to be French. I feel like the current political climate has led a lot of Americans to lose that pride in their own country. I just want to remind those people that you can be a proud American even with a laundry list of things you’d like to change about our country. Even with the many flaws of our nation, I wouldn’t want to change my nationality.

There’s no feeling quite like sitting on the hood of your car watching the fireworks on the fourth of July, cheering along with hundreds of your closest classmates in your high school football stands, or waiting outside your favorite store on Thanksgiving night, ready to knock people over for your chance at some Black Friday savings, after having given thanks several hours before for all that you already have. We are a relatively young country, but we still have plenty of traditions and rites of passage. Perhaps one right of passage every American should add to their list is leaving the US, to gain some perspective on what matters most to them.

I’d really like to hear feedback from anyone (American or not) who has been abroad and whether that changed your perception of your nationality or your identity in general. Traveling is near the top of my list of favorite things, but I’m not sure I’d enjoy it quite so much if I didn’t have a home to return to.

One thought on “Become More Patriotic By Going Abroad”